Happy Birthday, Rob!  For your birthday, I've got a special surprise...we are going to travel down the Tenn-Tom Waterway!!!  LOL

Kind of cloudy this morning.  We are almost ready to go.  Just checking and rechecking systems.  Still looking good!!  Two days at this marina is enough.  Don't get me wrong - it is very nice, but the wanderlust has taken over and we need to get moving! 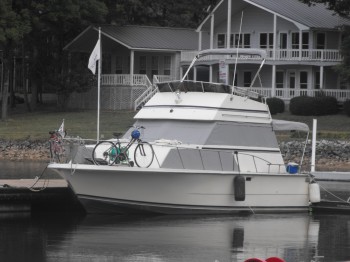 A couple "Loopers" have already left.  We are right behind you! 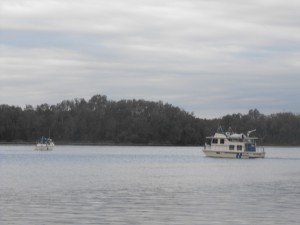 The Tenn-Tom is the flyway used almost exclusively by "snow birds" migrating from the northern climates in autumn and going back north in the spring.  By using this route, mariners do nothave to fight the Mississippi current on the upbound trip, nor will they have to go "outside" in the Gulf of Mexico between New Orleans and Mobile.

The first thing about the Tenn-Tom that we noticed and actually thought the whole waterway would be like is the "canal-like" appearance.  It is like this for about 22 miles, and is called the "Divide Cut."  This is a man-made gash through the natural divide between the Tennessee River and the Tombigbee River that made the waterway possible. 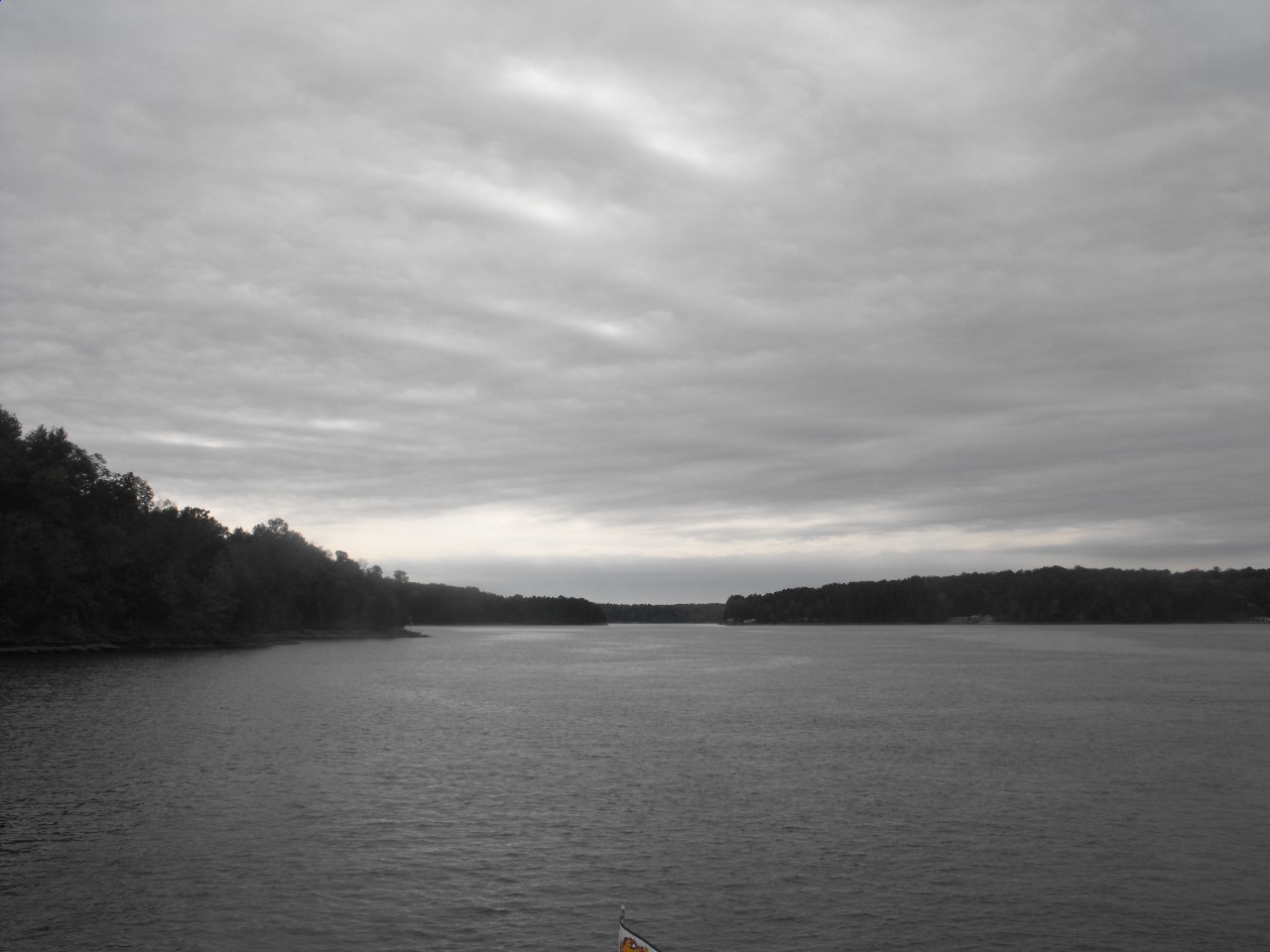 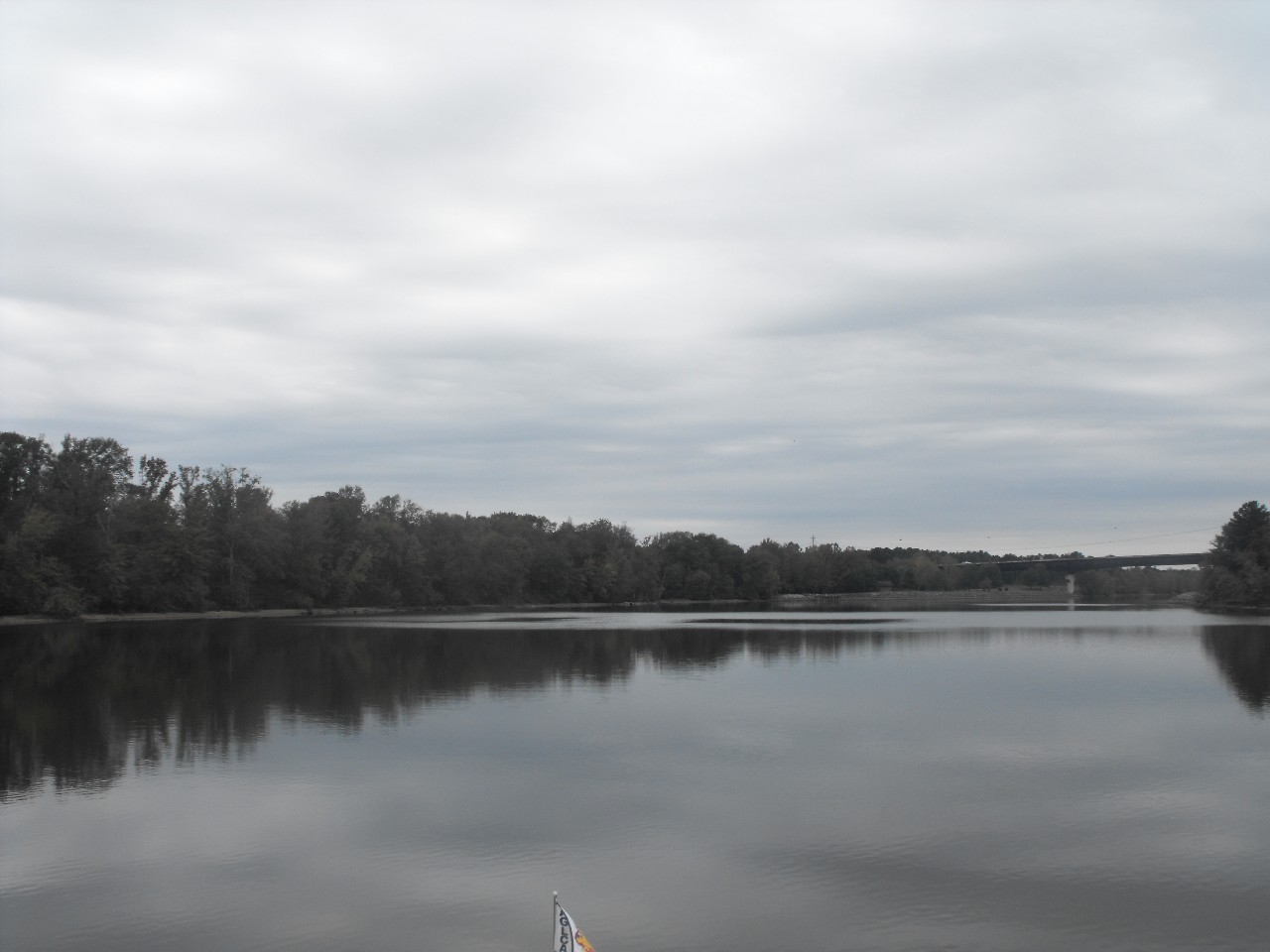 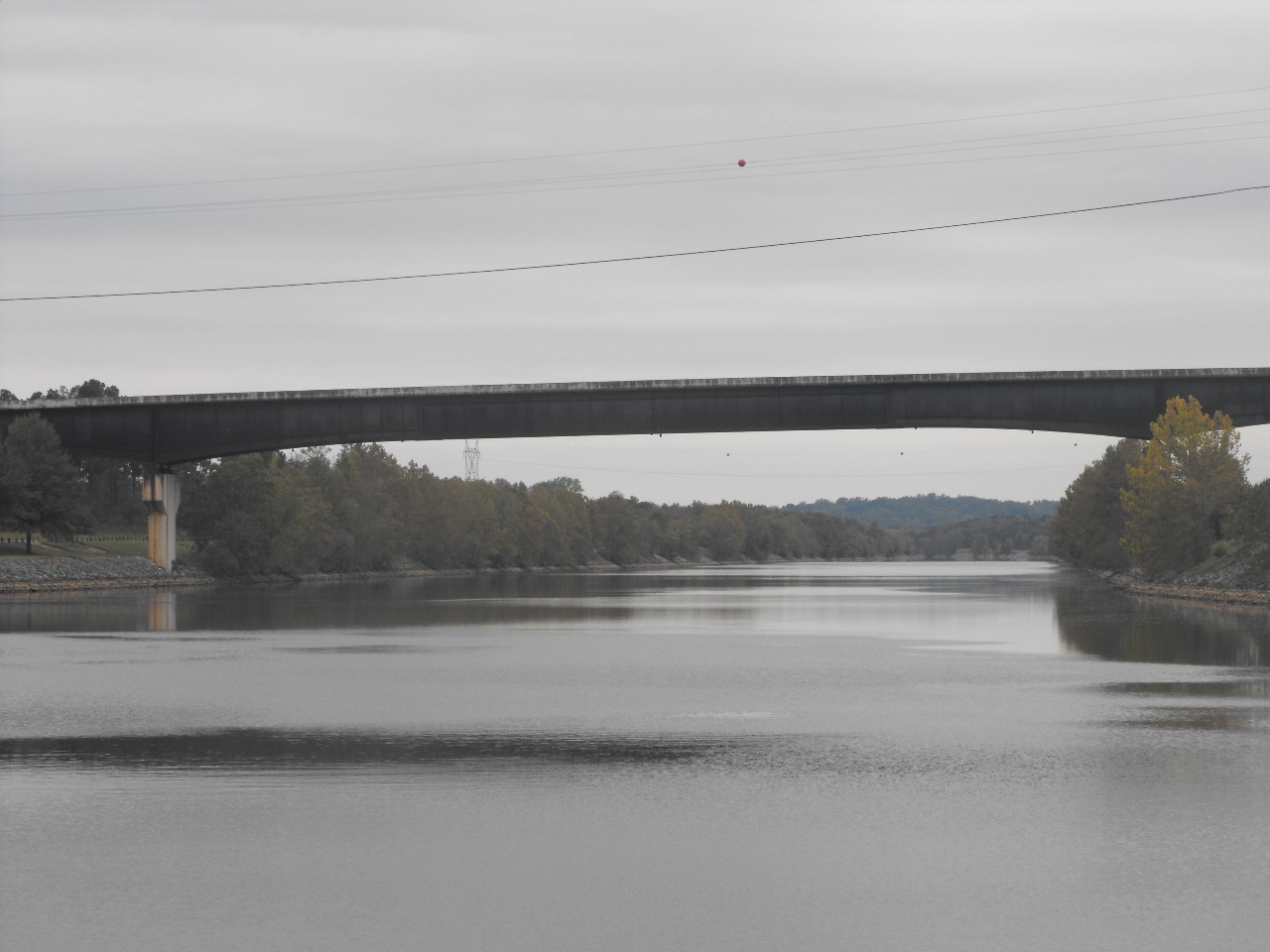 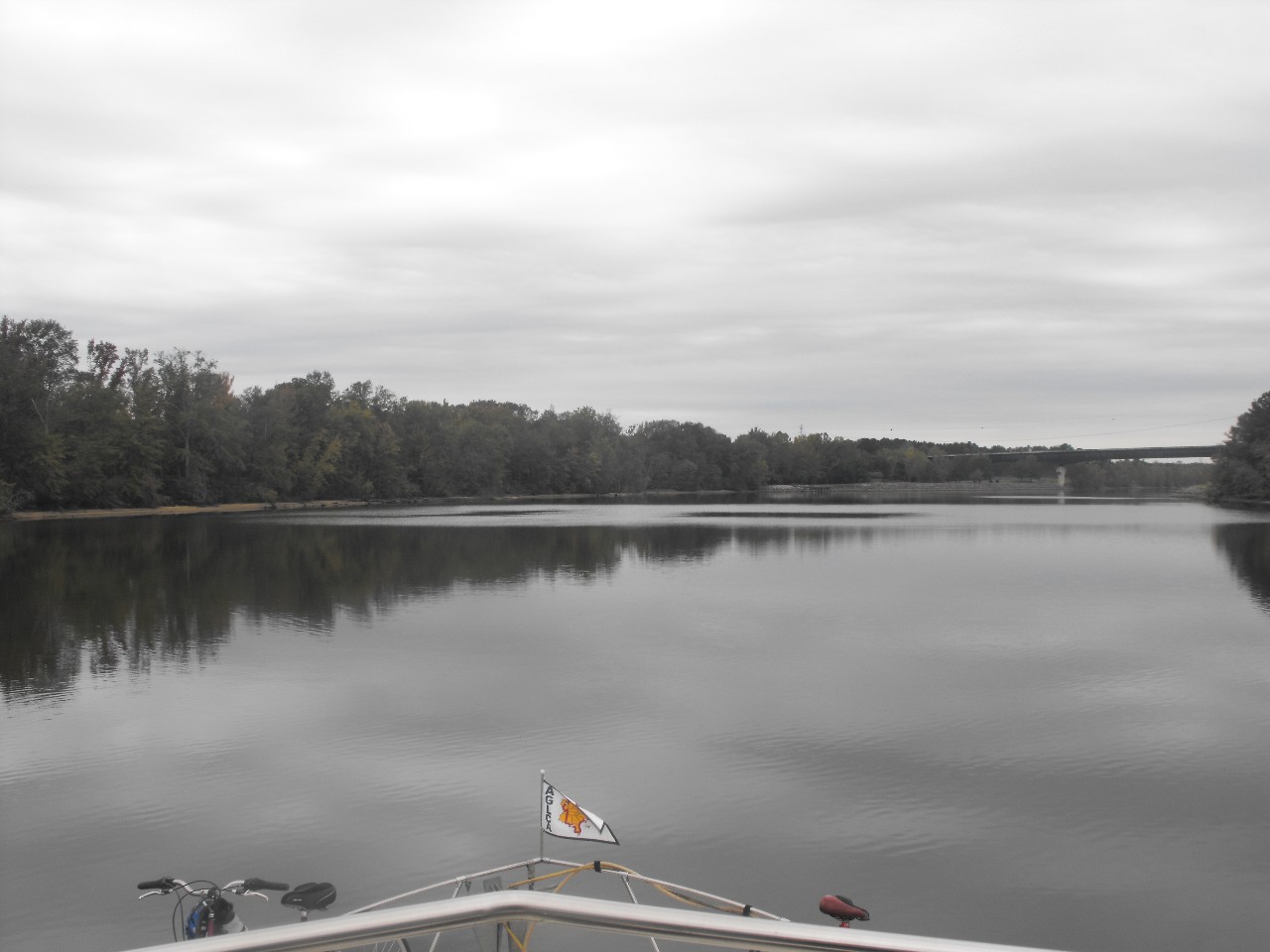 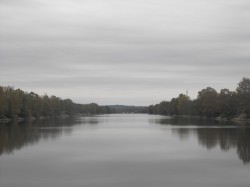 The shorelines are rock covered up fairly high between the 250 to 300 feet wide channel.  Also we are noticeably lower in the canal than the surrounding landscape.  I was at first surprised by the lack of floating debris.  The water is a little muddy but no junk floating. After a few miles I realized why this was happening.  Because the surrounding land was higher by about 30 feet special care had been taken to allow runoff to enter the canal without causing erosion to the banks.  The two methods used are called "slots" and "weir" type spillways.  The slots were used for smaller creeks and were concrete troughs about two feet wide and eight feet deep following the slope of the banks.  The larger streams were fitted with spillways divided by weirs.  They are somewhat hard to describe but the photos should clear that up. What appears to be happening is not only do they control erosion but serve to "strain" the inflow of all larger debris.  Although large volumes of water were still entering the canal through some of these passageways it was still relatively clear of flotsam. 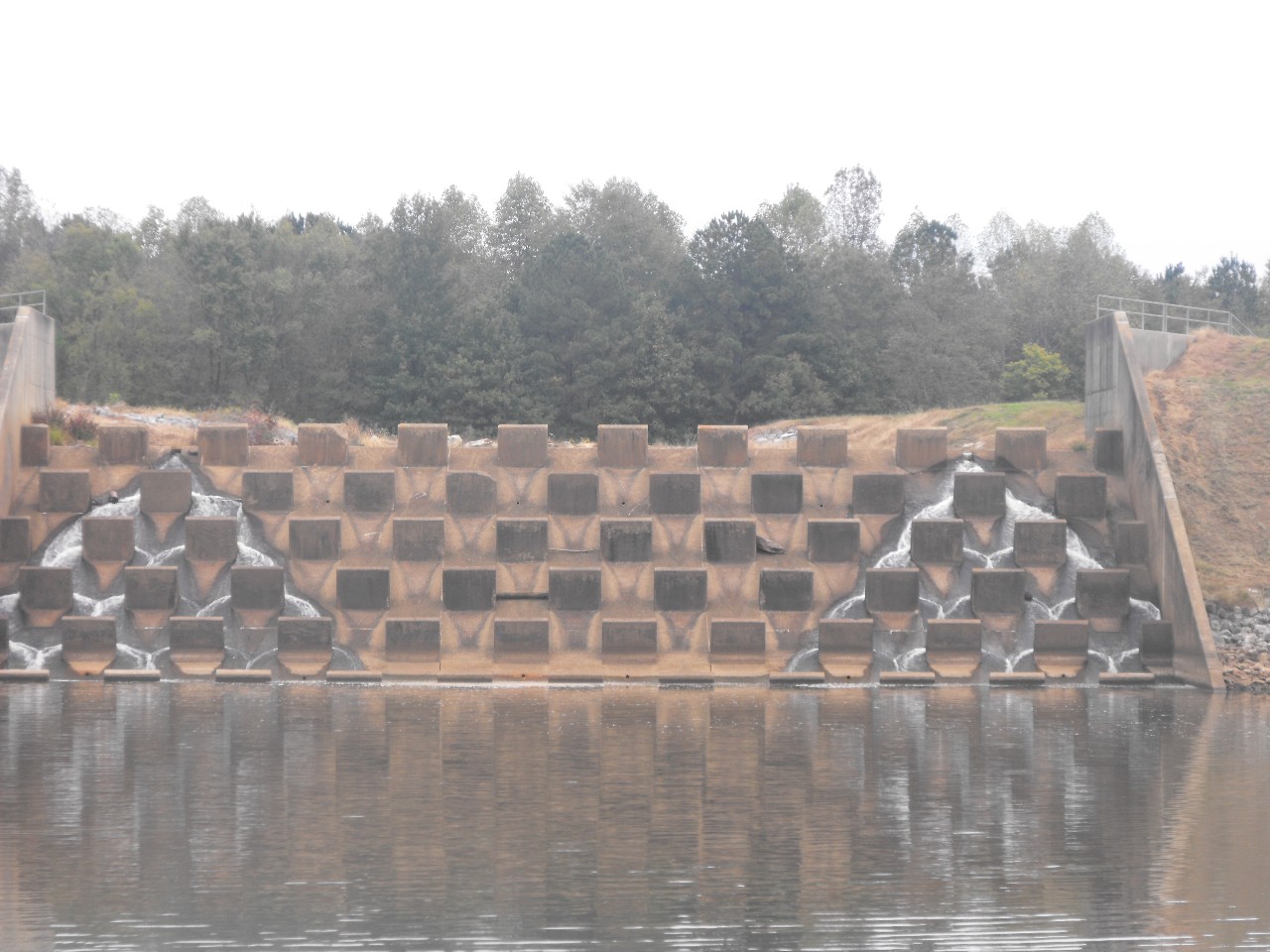 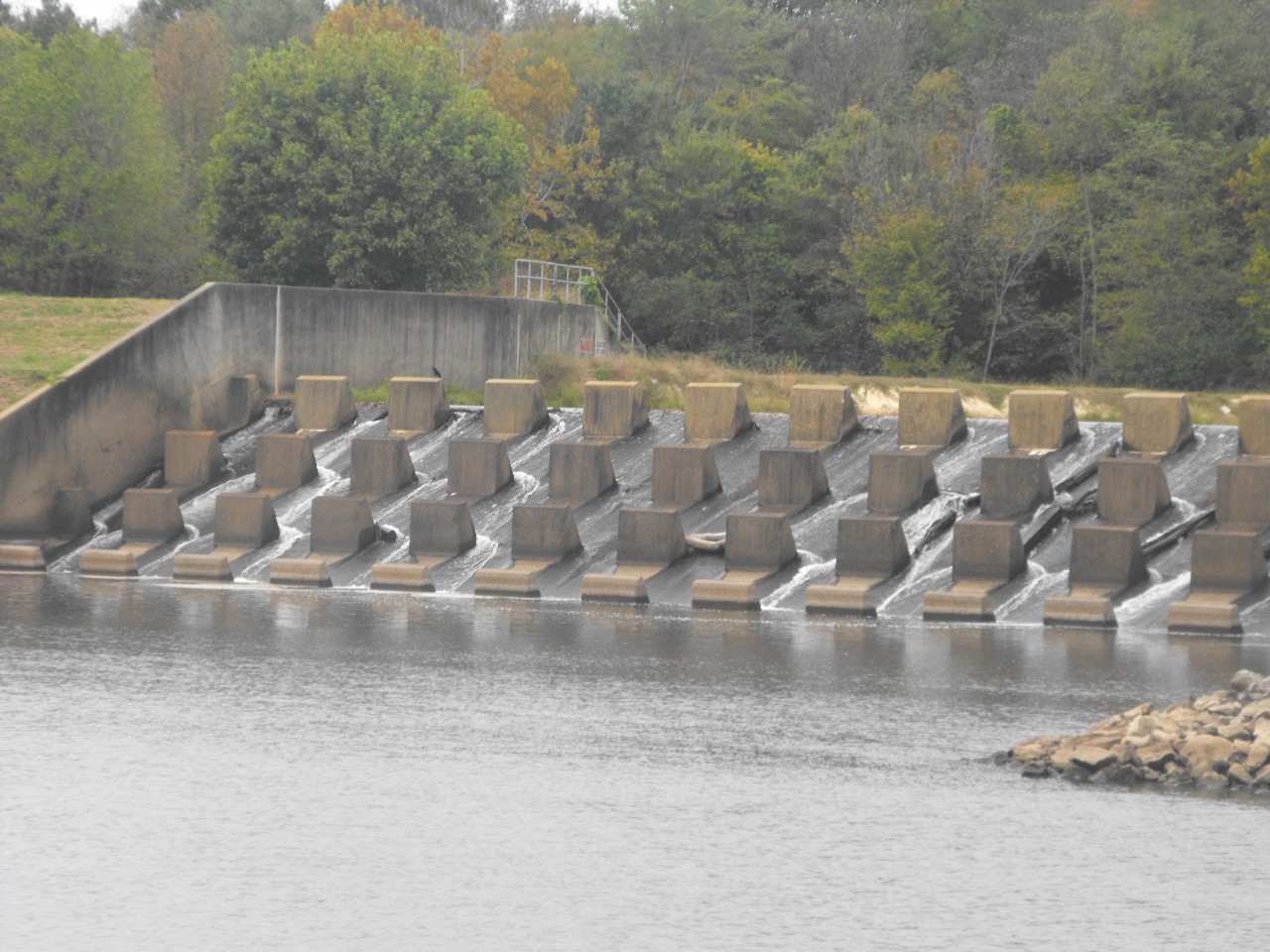 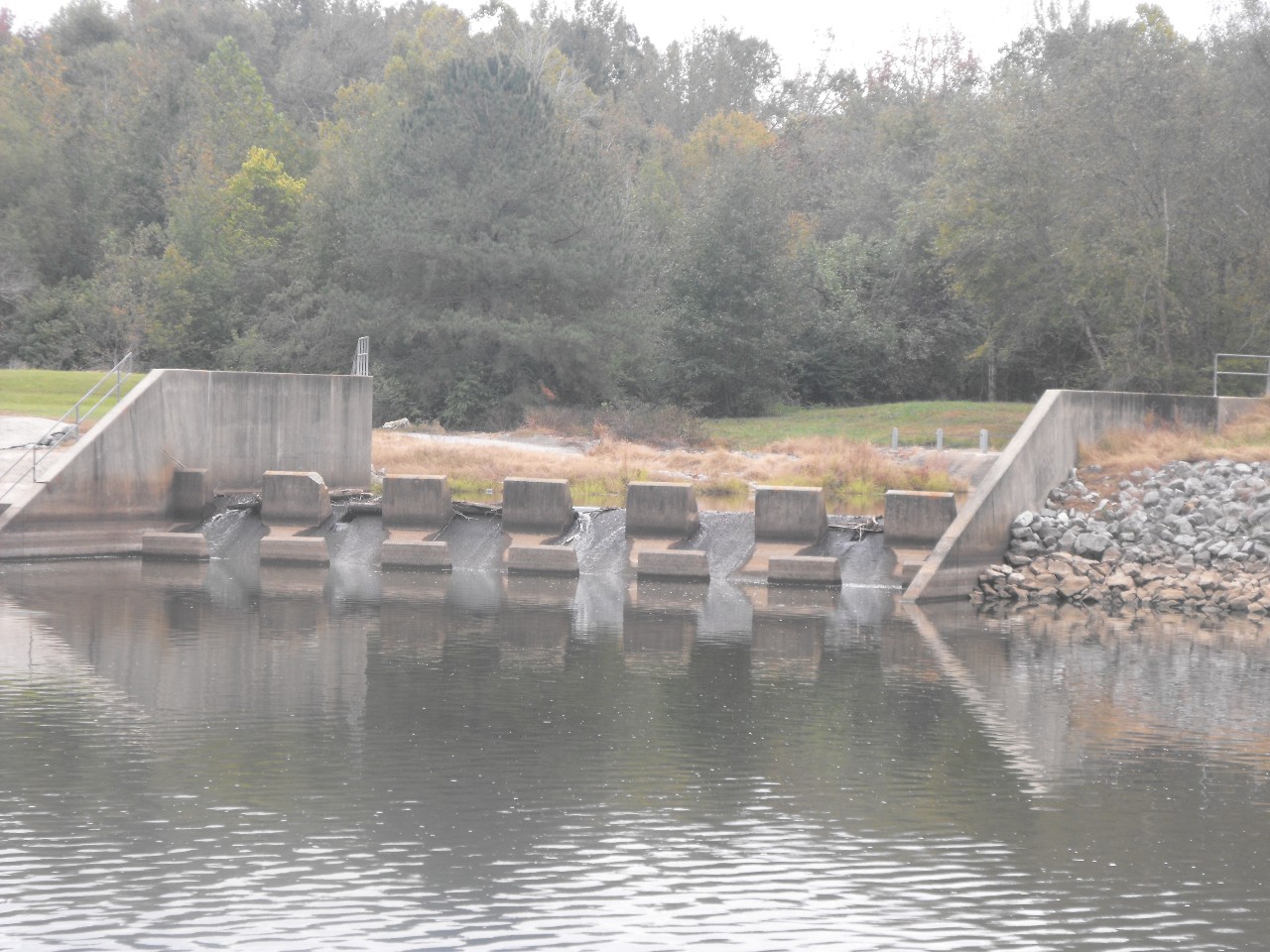 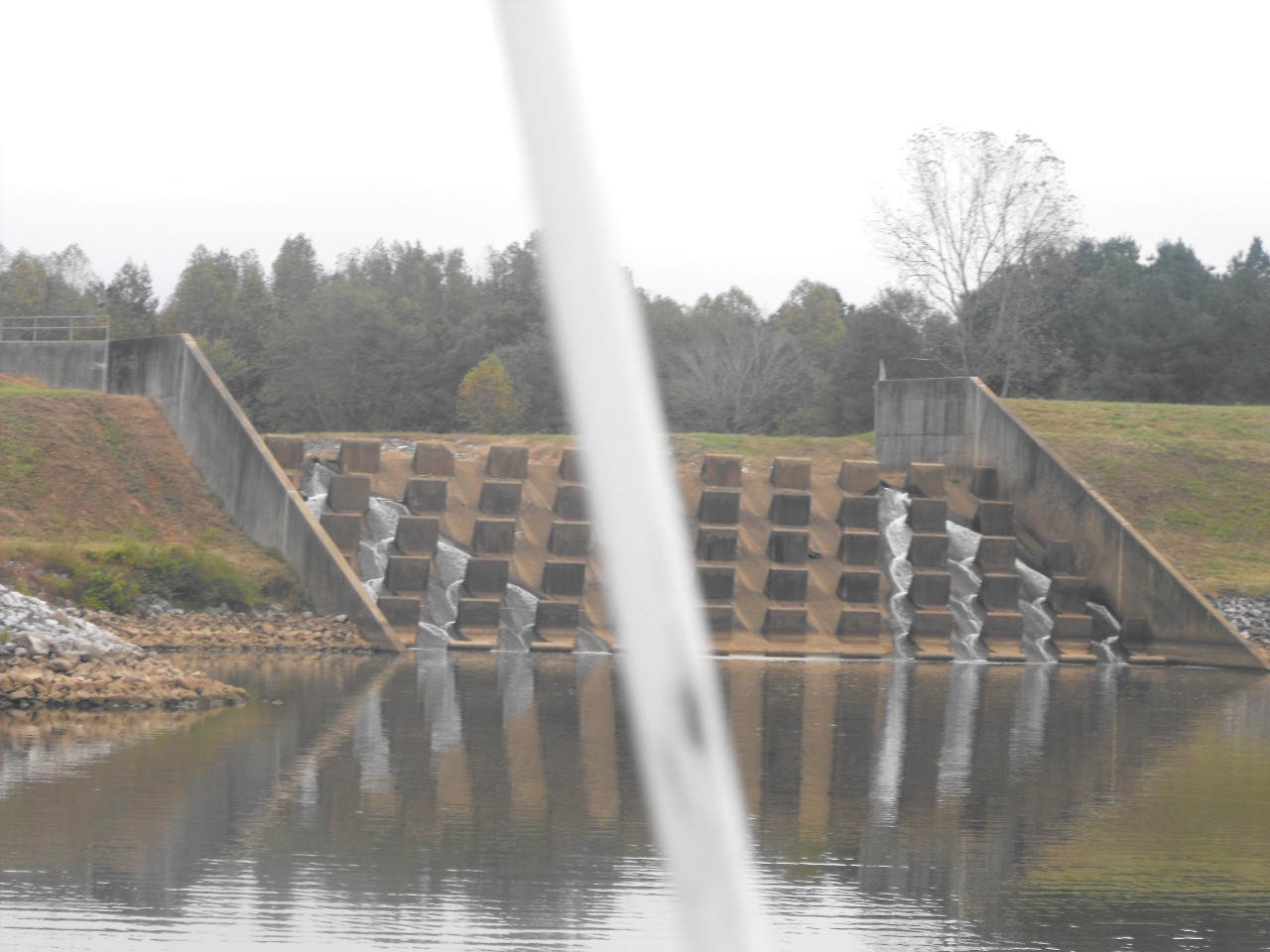 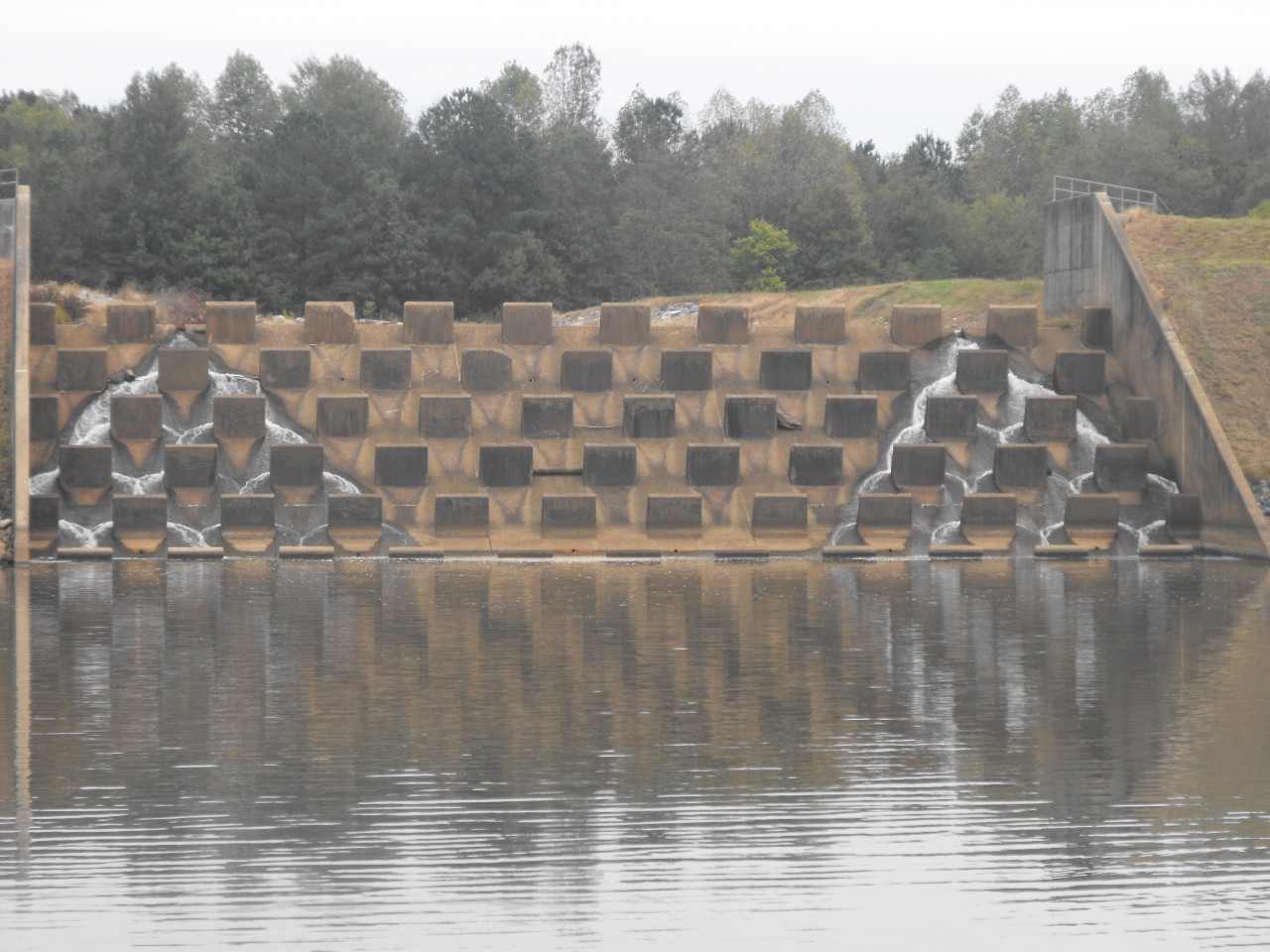 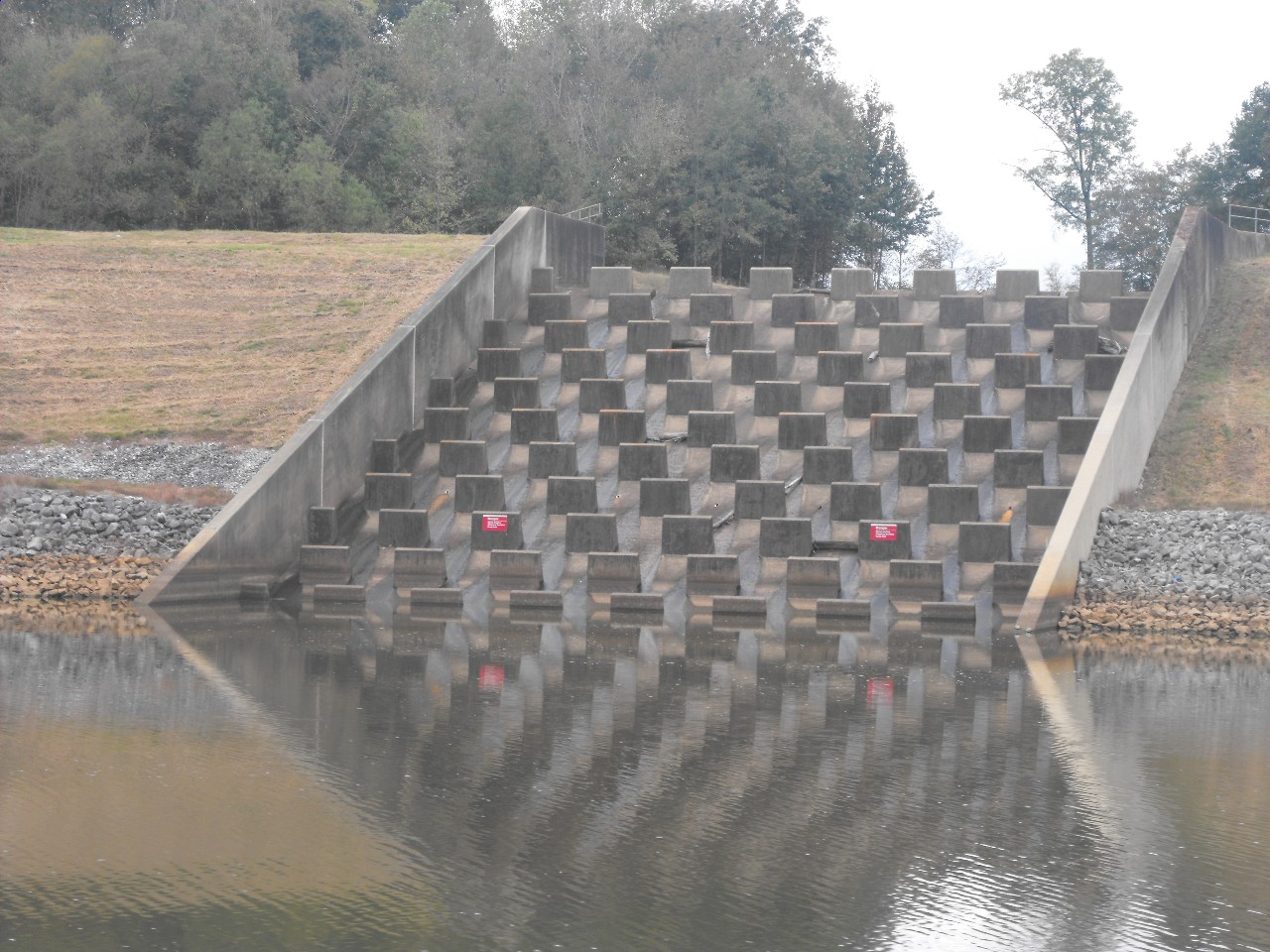 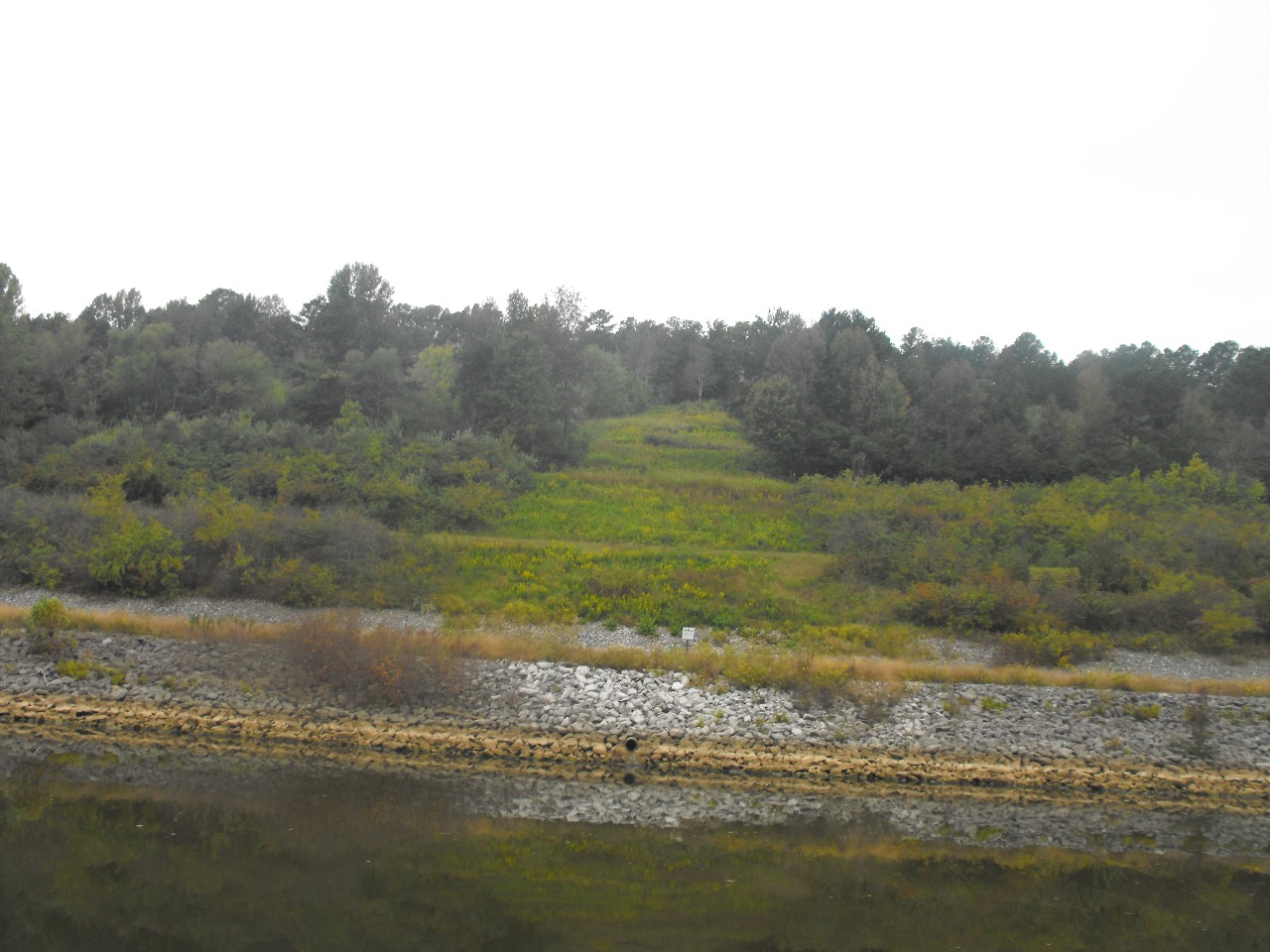 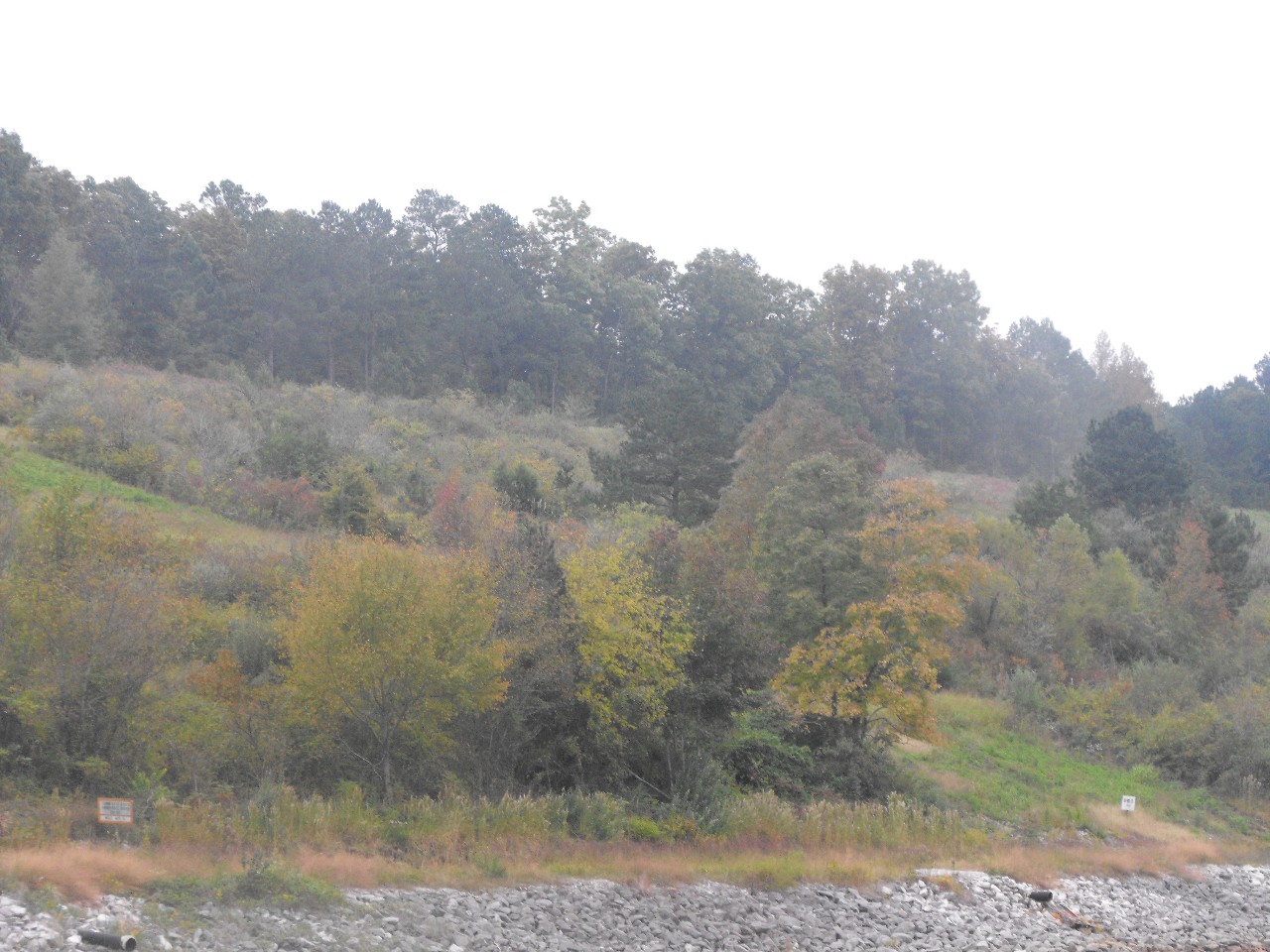 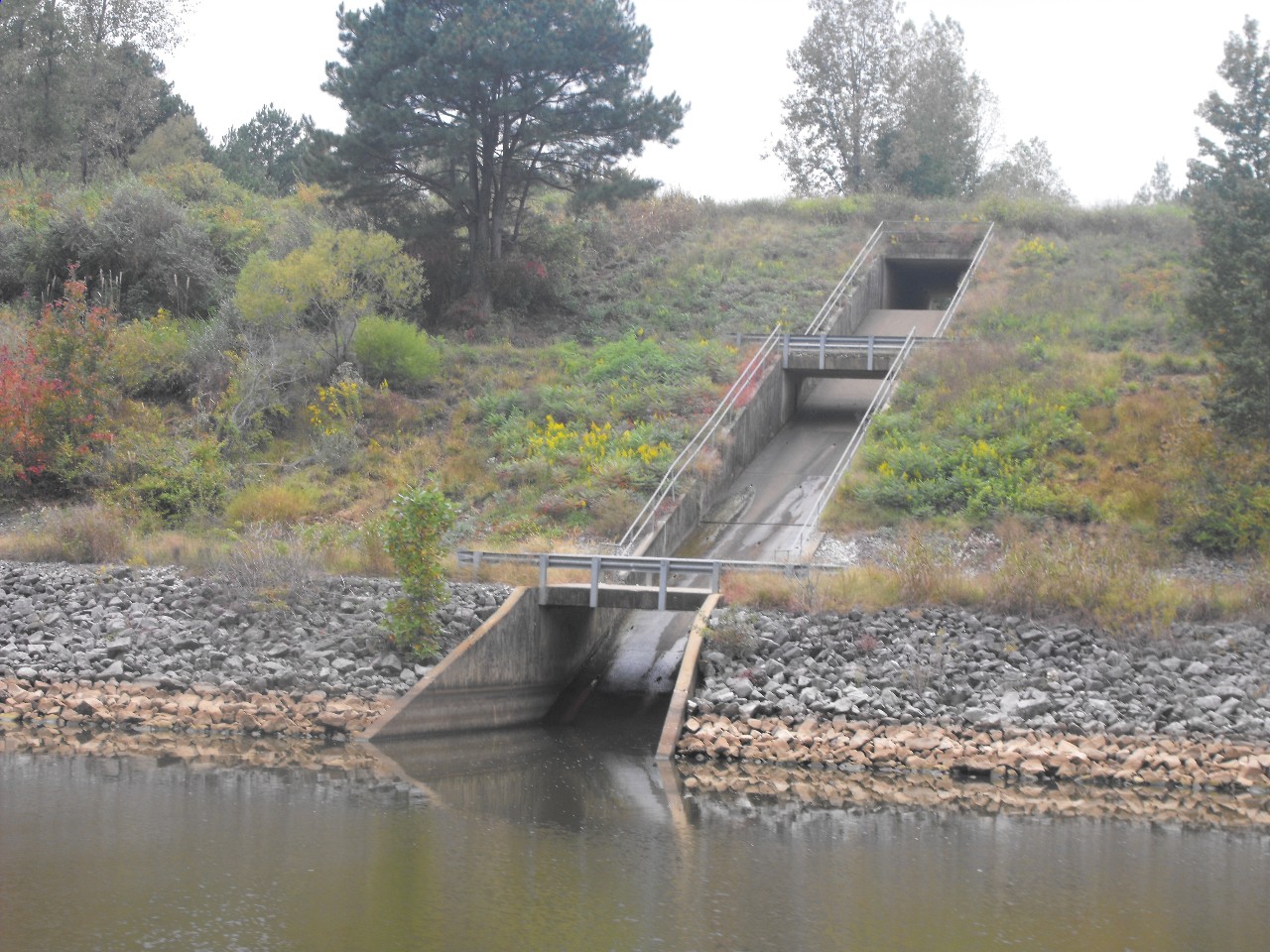 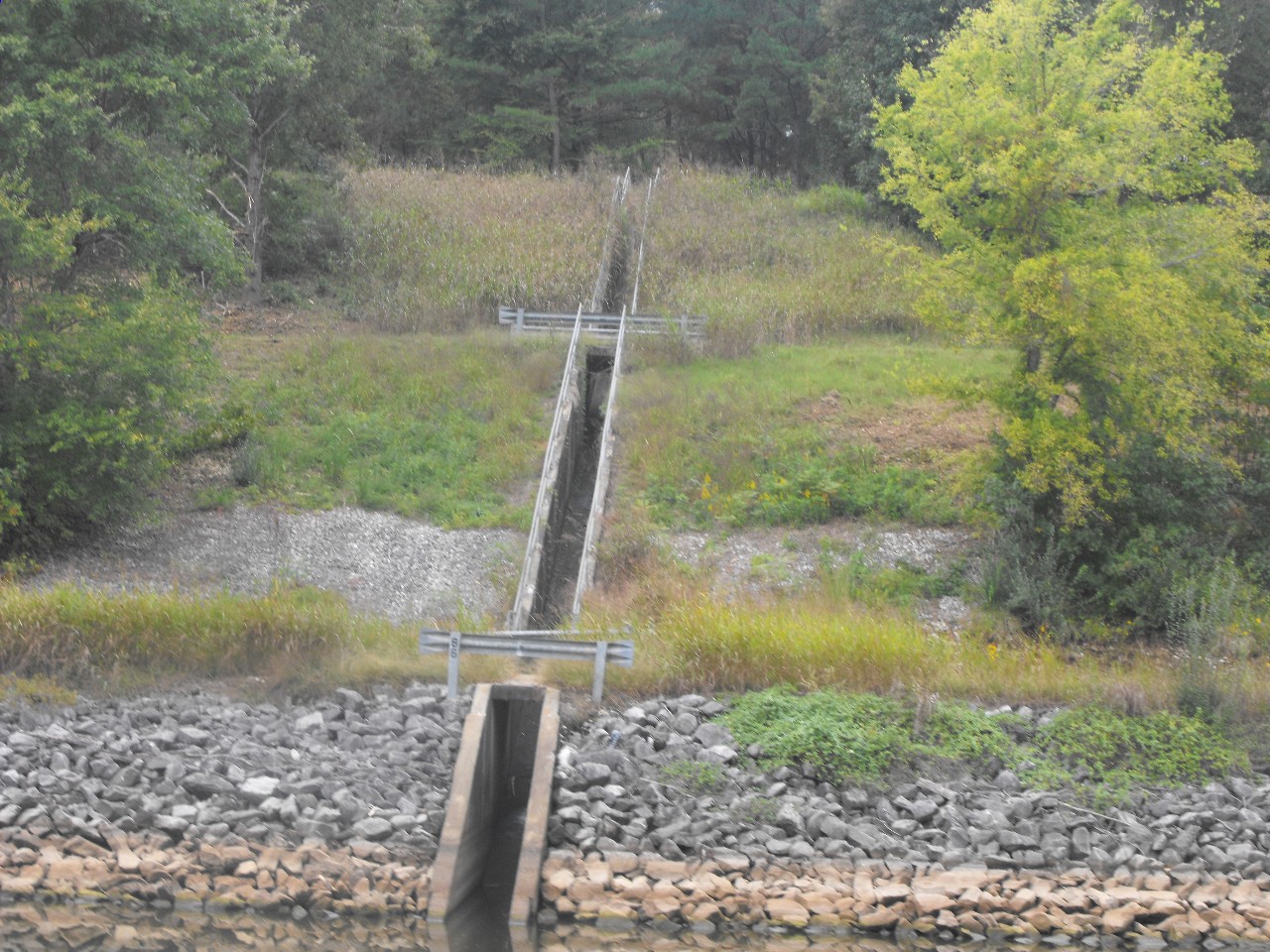 We are certain that this area is where all of the Great Blue Herons migrate, because they are everywhere! 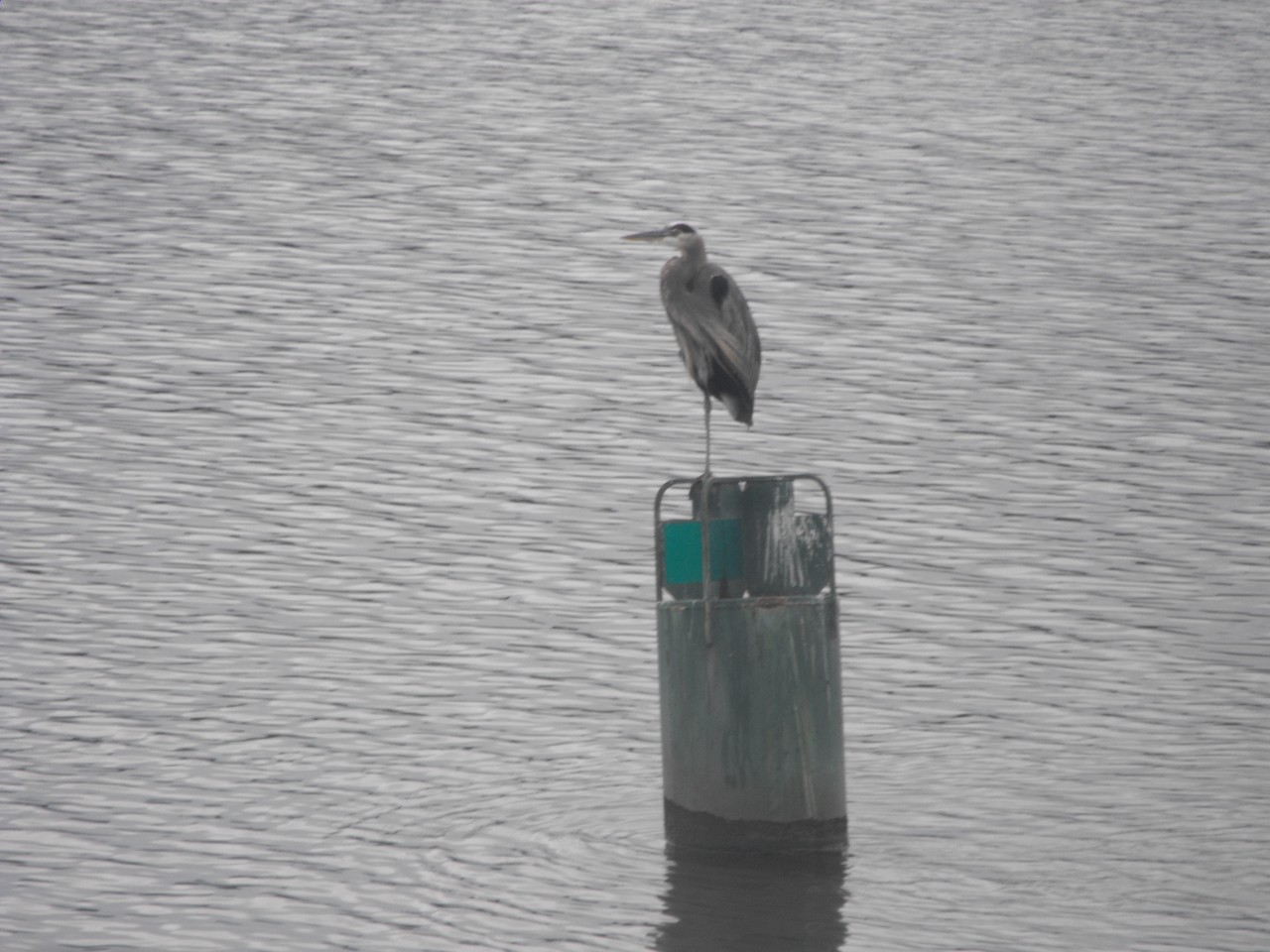 Along the way, we see the Corp working hard to clear a path with a very large wood chopper. 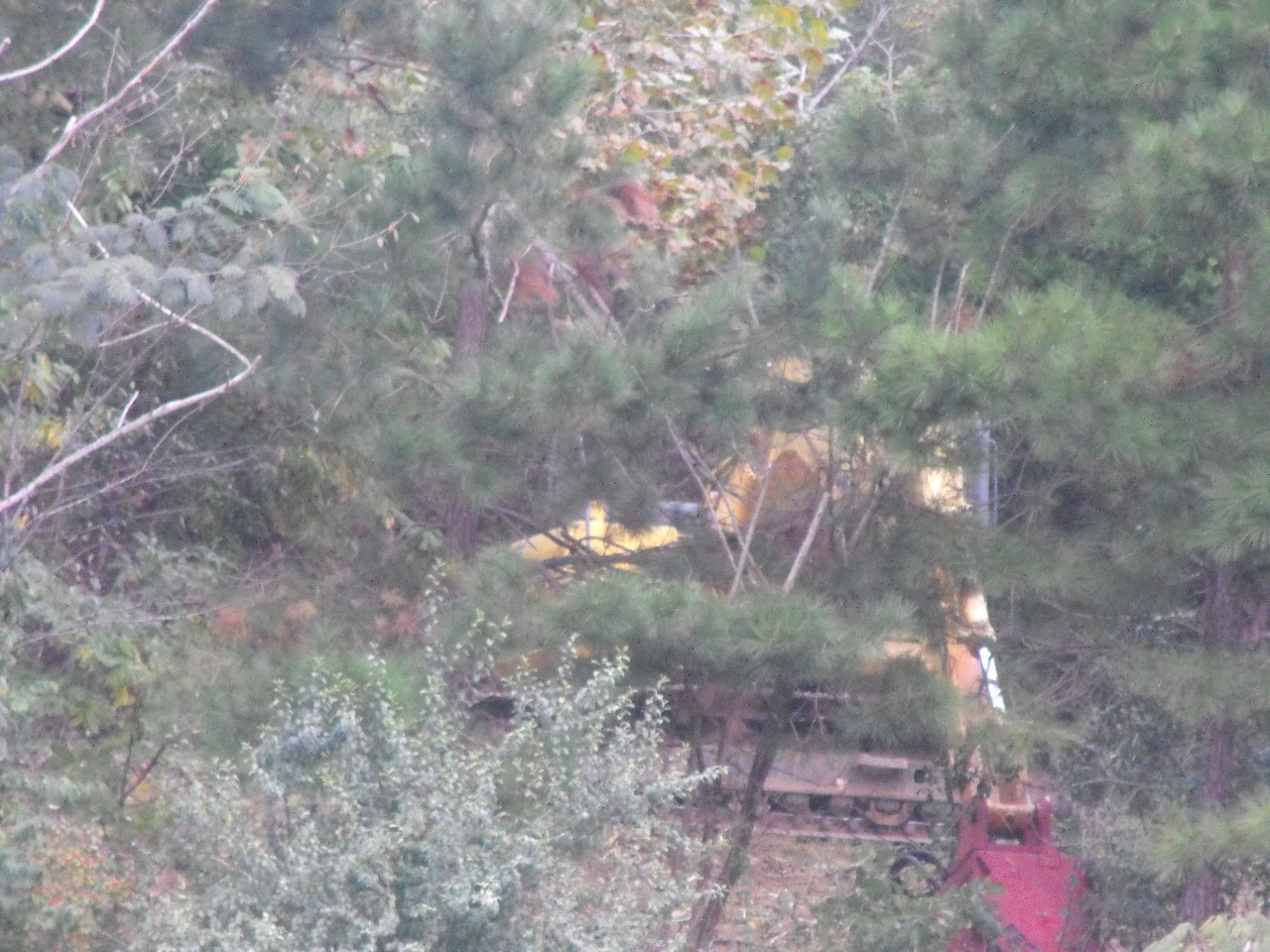 We finally reach our destination, MM415.2, a place on the Tenn-Tom known as "Five Fingers," so named because there are five bays that resemble 5 fingers of a hand that are all safe anchorage and every single one beautiful.  I know we agree and I think you will too. 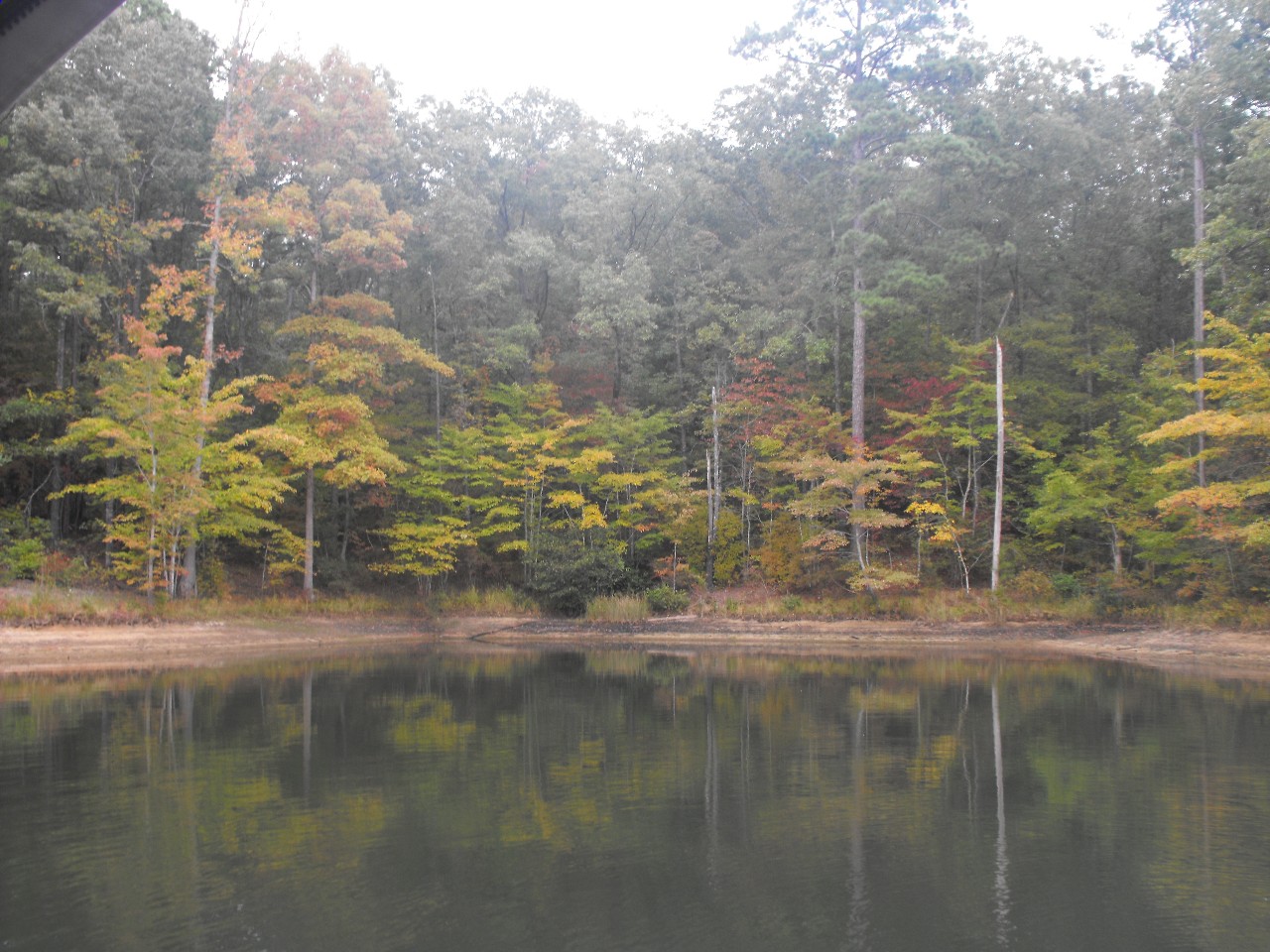 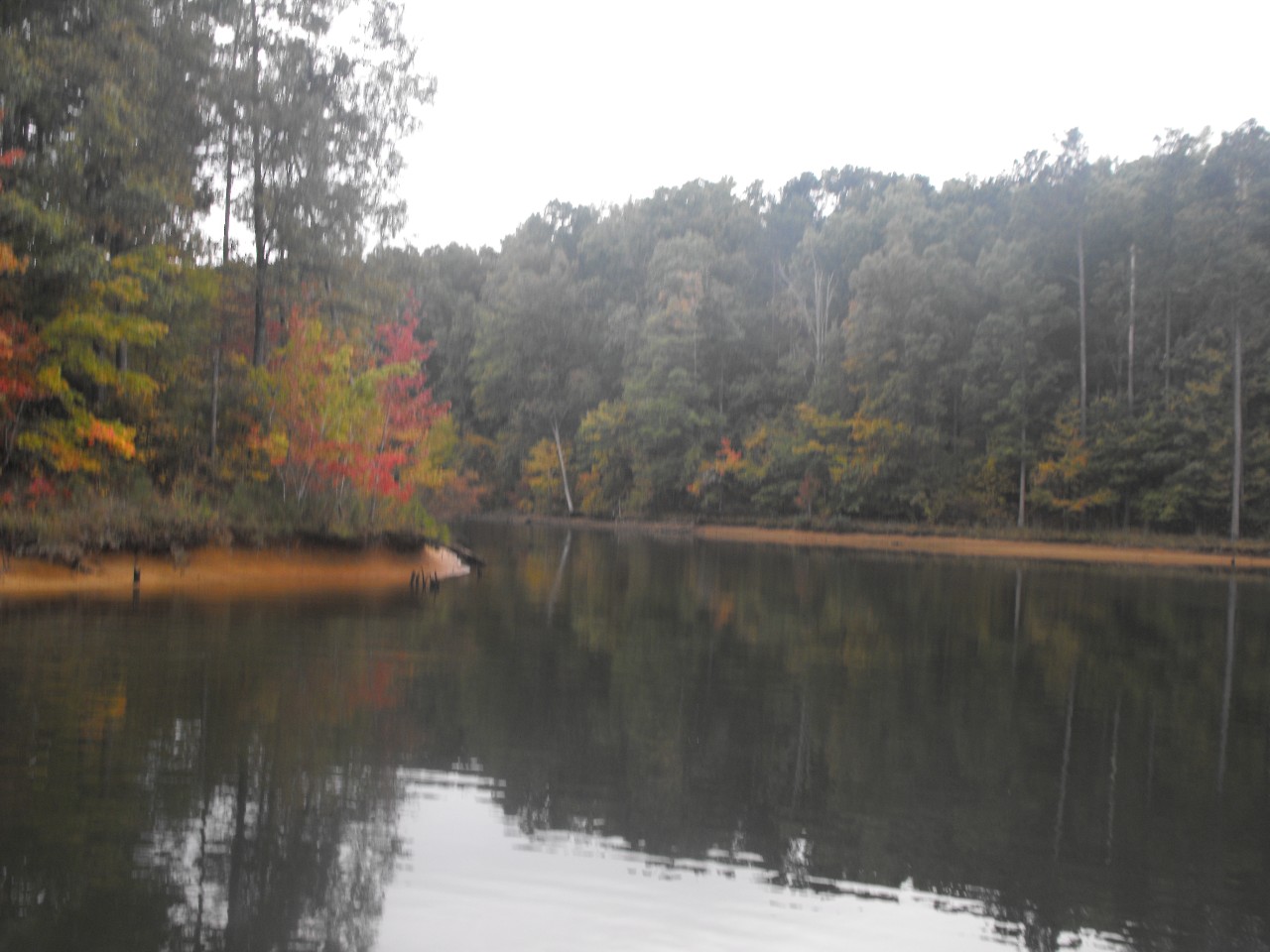 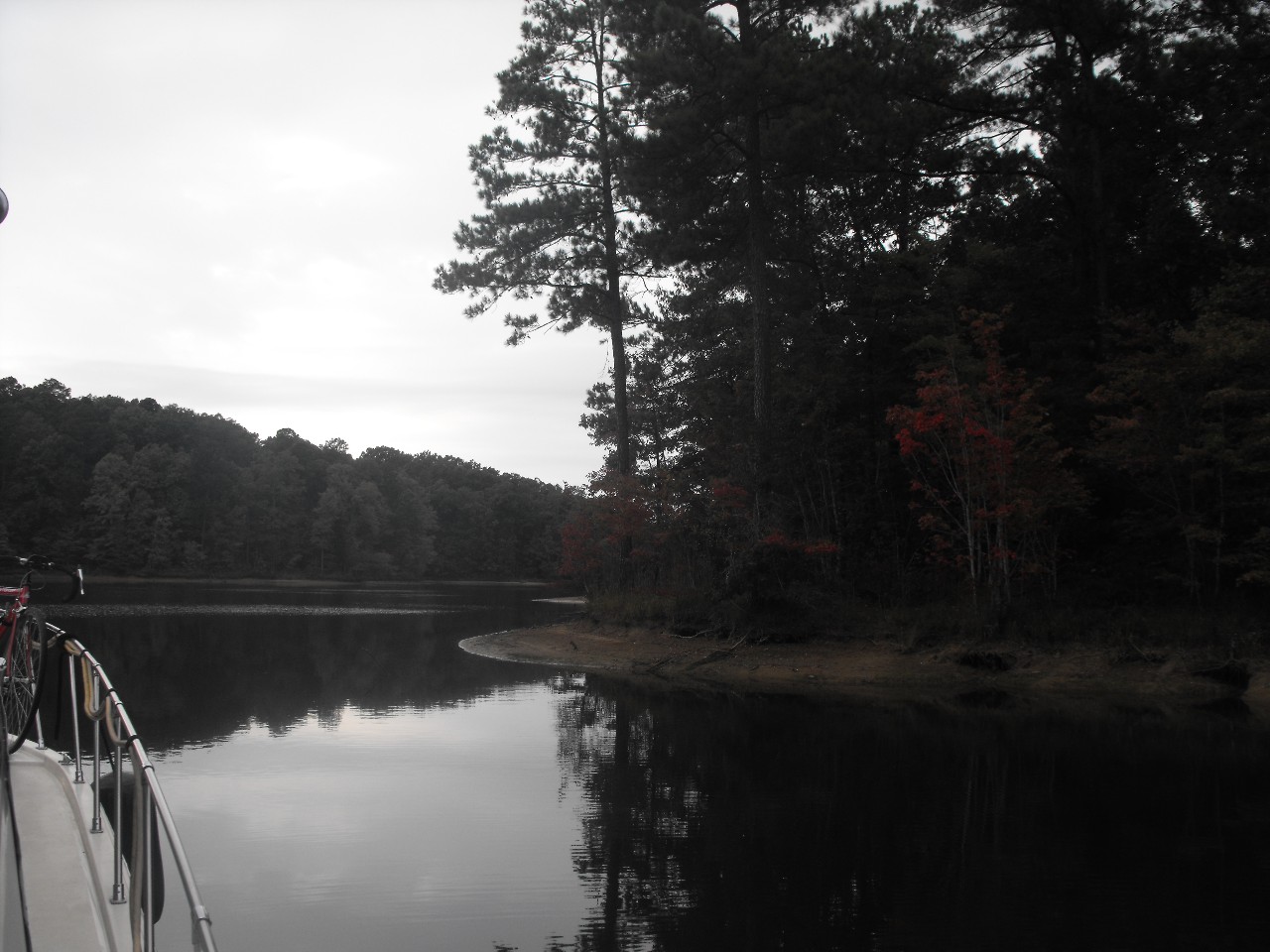 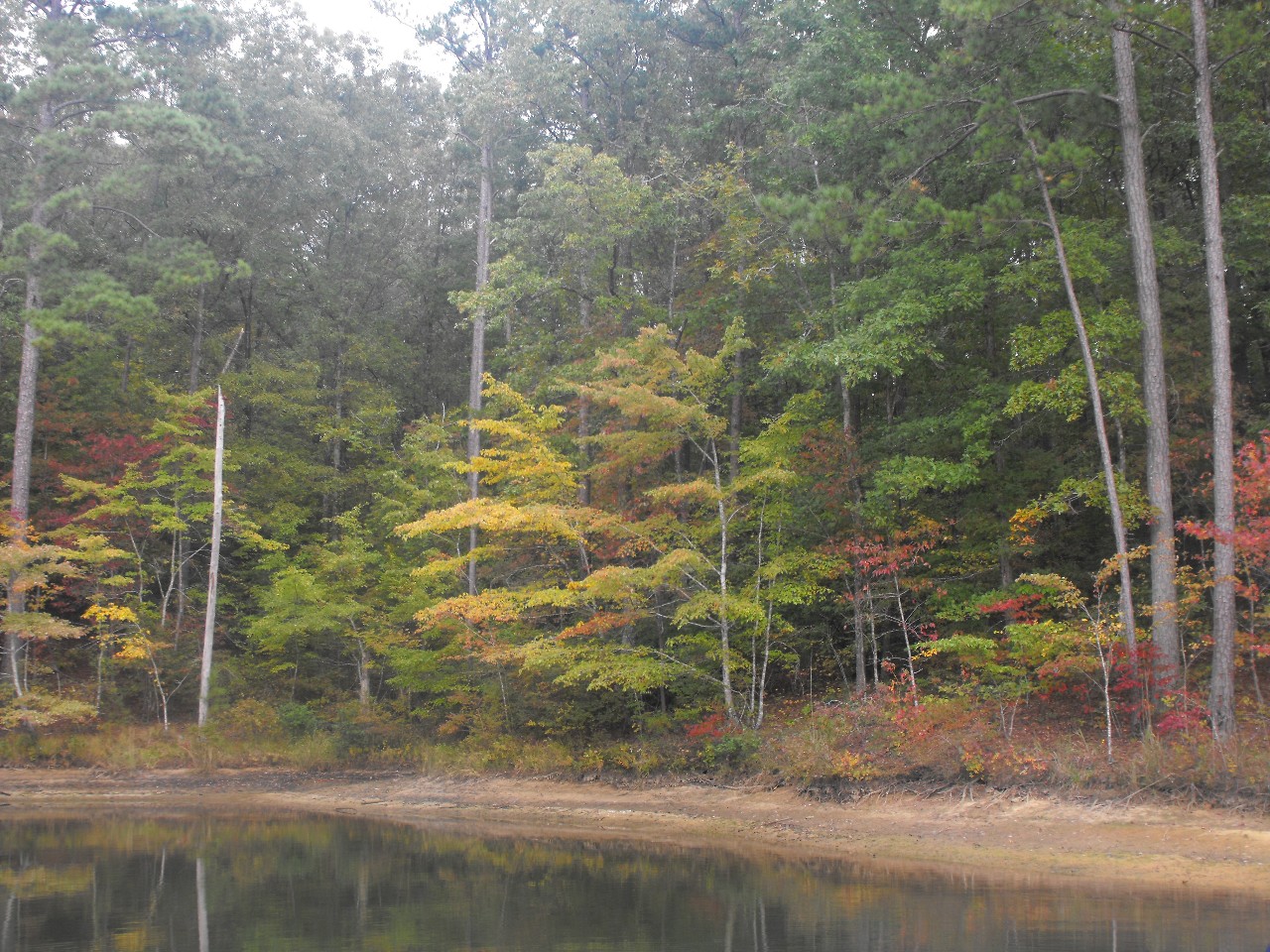 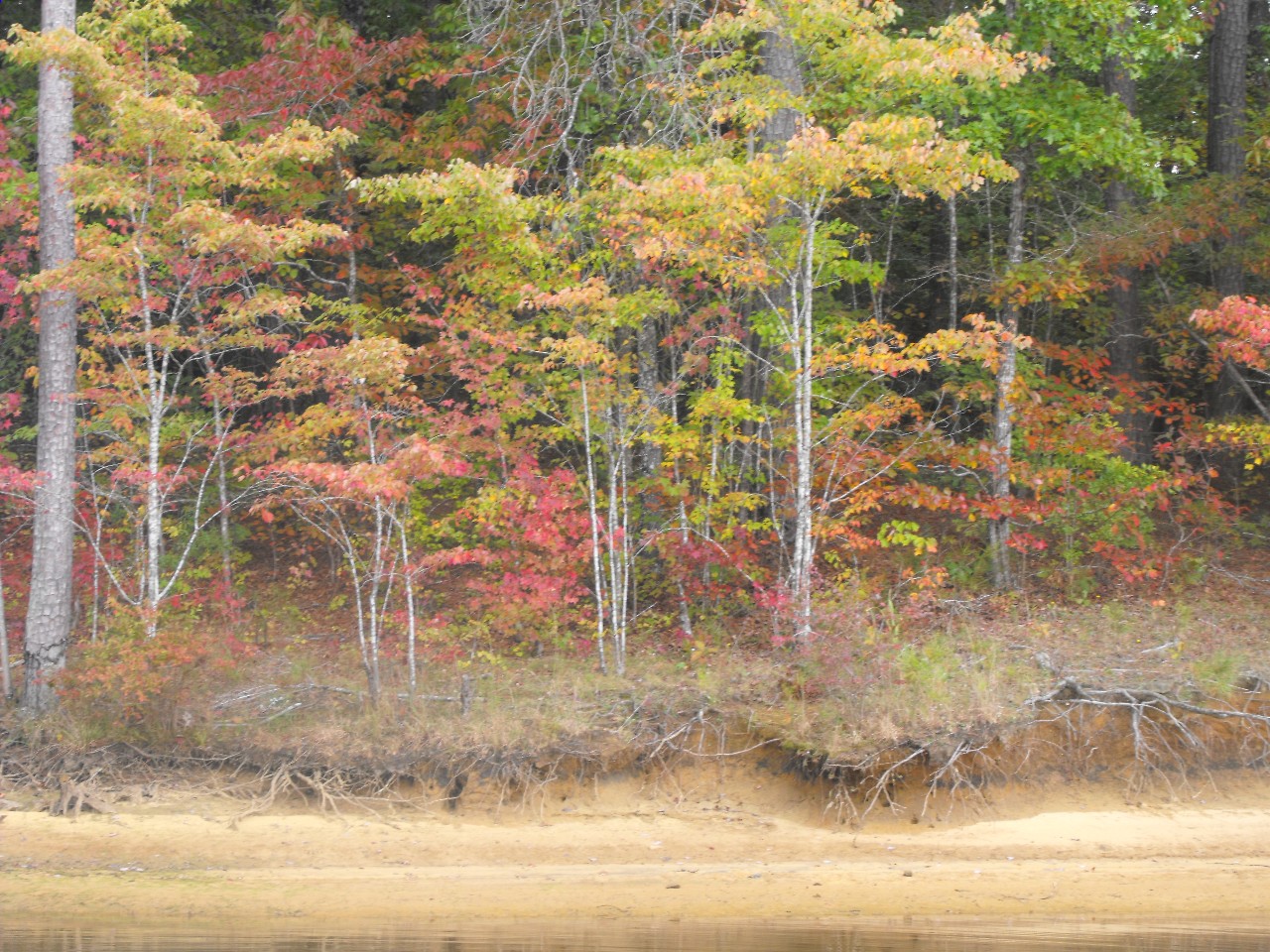 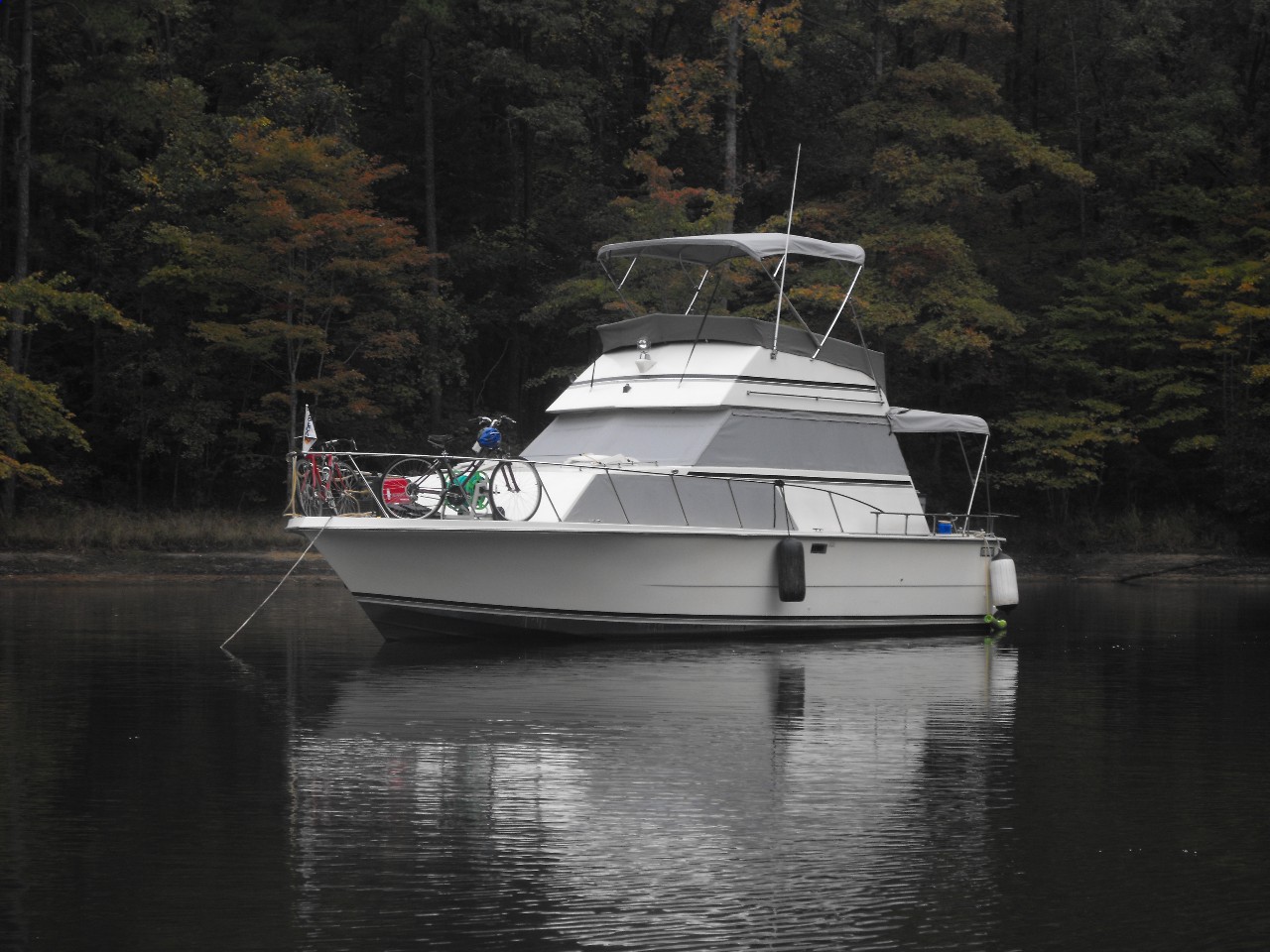 We set the anchor and settle in for the night.  It is so quiet here.  We would love to stay and plan to return - maybe with friends or family.  The bass are plentiful and the water is so clear.  There is a swimming beach close by and a marina where we can replenish fuel and supplies as needed.