Maintenance Week and we were busy!  Rob was able to get all of the following maintenance items completed on the Rump so we are confident that all systems are now a GO!

It's been a fun week too.  We hosted an abelskeever breakfast for 12 on our boat.  Cindy GIlbertson (Aurora) is an expert abelskeever maker and these were amazing! 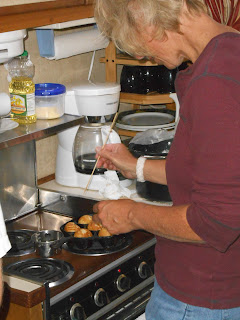 We attended two "docktail" nights (where boaters bring their own beverage and a munchie to share), a FREE chili cookoff at the Commonwealth Yacht Club, a 2" pork chop dinner at Patti's 1800 Restaurant (which Rob and I shared becasue it's WAY too much food for just one person), a 30 minute sauna, two laundry days, and three trips to Walmart with the courtesy van. (We bought a Verizon "Jetpack" so we should have internet now for the rest of the trip - YAY!)

Our vintage sears cannister vac that we carry on board needed a part - the one that holds the bag in place - after many online searches, the part was not to be found.  It will now RIP in a Grand River landfill and has been replaced with a Dirt Devil Upright.

We have met several wonderful couples and singles at Green Turtle Bay who are doing this trip in every type of boat.  Listening to their stories and experiences has been delightful.  We have always found fellow boaters on the upper mississippi and MN area to be friendly and helpful and that experience has carried through on this trip.  It will be sad to say goodbye to thesenew friends.

Green Turtle Bay Marina has been fun and although it will be hard to leave all of this luxury, we are getting antsy to be back on our river journey.

Side Note – from a fellow “Loopers” Jeff and Susie (Idyll Time) who left Hoppies just a few days after we were there.

We had just finished the daily briefing with Fern at Hoppies and had settled into a nice quiet evening. A 15 barge tow was going upstream at full throttle. Just past Hoppies, we heard his engines go to neutral. We immediately went up on deck to see why and soon saw Hoppie and his family running down the hill towards the docks yelling at us to untie the boats. The tow had run aground and two fully loaded coal barges had broken away and were headed for the docks. We were all off the docks within minutes and hovering out in mid channel. Hoppie, in a small John boat began to push the loose barges away from the docks. Luckily both barges missed the marina by 100 yards. After the barges had drifted downstream we were given the all clear to came back into the marina. Earlier in the day a downbound tow had taken out the red channel marker and now tows are running aground just upstream from Hoppies.Hoppies did an excellent job of preventing a potentially tragic collision. We spent the rest of the night monitoring channel 13 and 16 in case another tow broke apart. We would suggest everyone to keep your radios on and be alert while here as the low water is creating problem.

So while this trip can sometimes be noneventful, it can also be frightening.

Our last evening was spent aboard "Water Music" with owners Joel and Debby VanderWaal and Mike and Cindy Gilbertson for some fresh apple pie.  Debby wanted to thank us for letting her tag along on one of the Walmart trips - totally unnecessary gesture, but much appreciated.  It was fun to spend time with these folks who are all fellow Minnesotans.  Joel tuned us in to "Active Captain," a website that shows good spots to anchor out and we got a tour of their beautiful boat.  We sure hope we meet up with them again.